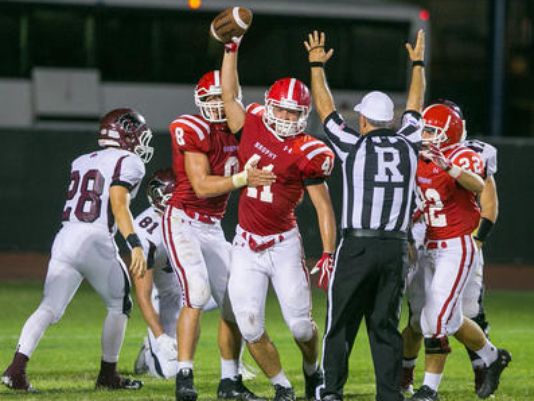 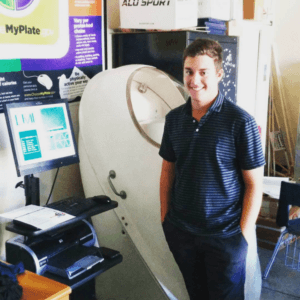 The strange white egg-shaped capsule inside the sports medicine room looks like something out of the latest “Star Wars” movie. However it is actually a state of the art fitness tool used to measure body composition, known as the Bod Pod. The Bod Pod is widely used by students, especially athletes, either looking to reduce their body fat, or put on lean muscle. The machine uses compressed air to determine the density of the user’s body, which can calculate a lean mass to fat ratio.

“The goal is to ultimately have students understand their body, understand their health, understand why it’s important from a health standpoint to maintain healthy body composition… not just here at Brophy but as a lifetime health measure,” said Physical Education Department Chair and head Athletic Trainer Mr. Chris White.

According to Mr. White, a healthy body fat percentage ranges from 7 percent to 20 percent, but each student is a unique case.

The Bod Pod makes the stressful measurement process quite simple and easy.

It begins with the user wearing a form fitting material and as little clothing as possible for an accurate reading. Next, they enter the pod and sit still while the pod measures the density of the user’s body, this happens in two tests of roughly 50 seconds each. The machine sends the raw data to a computer, which interprets and places it on a spreadsheet for students to see their results.The computer holds onto your previous tests as well, which serves as a way to track body composition over an extended period of time.

“For the past five or six years, we have been testing all our freshman with a pretest and posttest,” Mr. White said.

This allows students to compare their current body composition with their composition as a freshman, which, for many varsity athletes, is a dramatic difference. Health teachers at Brophy also include the Bod Pod as a main part of the curriculum for student nutrition and exercise.

“We thought it was really vital to have as part of our curriculum, so they can understand how to eat well and maintain a healthy body composition,” Mr. White said.

Mr. White tests his health students to track their fat loss or gain and create a diet plan to achieve a healthy balance of lean muscle and fat.

“Students who really follow the program and are attentive to diet and exercise are able to meet their goals that we help them establish,” Mr. White said.

The Bod Pod technology is not exclusively used on campus, it can be found in many high end sports medicine facilities such as the Mayo Clinic, Cleveland Clinic, many NFL training centers and military training facilities. The Bod Pod was introduced to Brophy when Mr. Orson Kinney from Body Technologies got in contact with Mr. White and the physical education department.

The school partnered with Mr. Kinney, and thanks to a donation from Michael’s Catering, brought Bod Pod testing to students at no cost.

“I had a vision that the best way to influence a person’s health is by educating them with quality, objective health information and to do it while they are young,” Mr. Kinney said in an email to The Roundup.

Mr. Kinney said he promotes the idea of teaching students now before unhealthy habits are formed.

“It is much harder to try to change behaviors of someone that has years of bad habits ingrained into their daily life,” Mr. Kinney said.

The device is helpful for many athletes, particularly the wrestling program in which keeping a certain weight is essential to making a specific weight class.

“The Bod Pod is especially great for wrestling, since most of the time you’re trying to drop weight and make a lower weight class,” said Sebastian Espinosa ’16, a varsity wrestler.

The Arizona Interscholastic Association has strict rules on how much body fat a wrestler can lose in a specific amount of time. The rule states that male wrestlers must maintain a minimum of 7 percent body fat going into the first meet, and wrestlers cannot lose more than 1.5 percent of their body weight within a week. The rule is meant to keep wrestler’s safe as cutting weight too quickly can result in severe health concerns. This makes the Bod Pod a critical tool for the wrestlers, and for this reason it is used by other wrestling teams from across the state.

A common misconception regarding body composition is that the lower the body fat, the better.

However, a body fat percentage that is too small can be harmful to the body. The Bod Pod is available to all students on Thursdays after school for testing, and students are also able to meet with a registered dietitian to go over a meal plan that fits their own needs.

“The Bod Pod serves as a very useful tool and a lot of student’s should take more advantage of it,” Espinosa said.